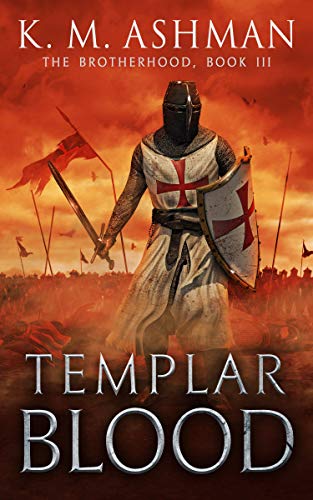 Templar Blood: The Battle of Hattin (The Brotherhood Book 3)

There is an uneasy peace across the Holy Land. King Baldwin IV is on his death bed and nobles across the Outremer jostle for position, each fully aware that his heir, the boy king, Baldwin V, is sick and unlikely to survive. The politics of Jerusalem consume the pretenders to the throne, so much so, that the increasing risk from Saladin goes unnoticed.

But to the east of the Dead Sea, the notorious Templar and castellan of Karak Castle, Raynald of Chatillon, sees the danger and continues to campaign against Saladin’s people at every opportunity. His actions are brutal and find little favour from his allies, but he is the Lord of the Oultrejordain and rules it with an iron fist.

In the coastal city of Acre, a woman arrives from Cyprus, desperate to find her missing son but to do so, she has to venture deep into the heart of enemy territory, a place where Christians fear to tread. Despite risking the wrath of Raynald, she forges ahead, seeking help from an old friend and an unlikely ally, but success is far from assured, especially when she faces betrayal from those she trusts the most.

With war looming, and the Christian forces still reeling from their overwhelming defeat at Jacob’s Ford, there is only one way to defeat the Ayyubid, and that is for the Christian armies to unite under Jerusalem’s banner. But with personal gain on many people’s minds and treachery around every corner, Jerusalem is under serious threat for the first time in generations.