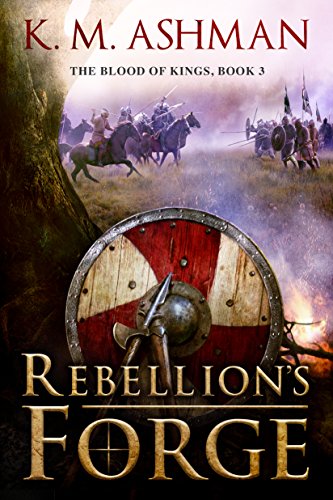 An uneasy peace reigns in Wales. It’s 1109 and the truce with England hangs by the thinnest of threads. While King Gruffydd ap Cynan’s rule of law holds in the north, a spirit of rebellion is rising in the south, as tearaway princes and rebels grow to resent England’s oppression of their homeland. And when Nesta, married off in a political move by England’s King Henry, leaves the safety of her husband’s castle to attend a celebration, the rebels seize their opportunity.

The truce broken, England’s rulers look to turn the ensuing chaos to their advantage, and to crush Wales under their boot once and for all. Gruffydd is left with a stark choice: enforce the peace he so desires for his land, and betray his countrymen, or risk everything he has built by going to war with the English once again. But the decision is soon taken out of his hands by those who ride for liberty from the depths of Rebellion’s Forge.

Rebellion’s Forge is the third book in the Blood of Kings trilogy.