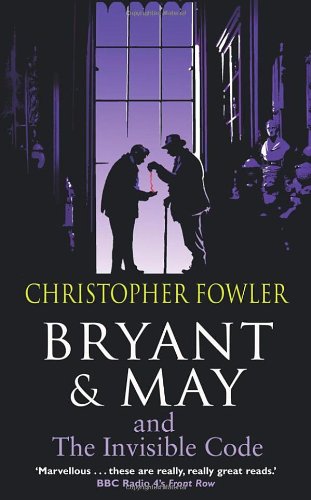 Bryant & May – The Invisible Code

Two small children are playing a game called ‘Witch-Hunter’. They place a curse on a young woman taking lunch in a church courtyard and wait for her to die. An hour later the woman is indeed found dead inside St Bride’s Church – a building that no-one else has entered.

Unfortunately Bryant & May are refused the case. Instead, there are hired by their greatest enemy to find out why his wife has suddenly started behaving strangely. She’s become an embarrassment to him at government dinners, and he is convinced that someone is trying to drive her insane. She has even taken to covering the mirrors in her apartment, and believes herself to be the victim of witchcraft.

Then a society photographer is stabbed to death in a nearby park and suddenly a link emerges between the two cases. And so begins an investigation that will test the members of the Peculiar Crimes Unit to their limits, setting Arthur Bryant off on a trail that leads to Bedlam and Bletchley Park, and into the world of madness, codes and the secret of London’s strangest relic.

As the members of the Peculiar Crimes Unit dig behind the city’s facades to expose a world of private clubs, hidden passages and covert loyalties, they realise that the case might not just end in disaster – it might also get everyone killed.