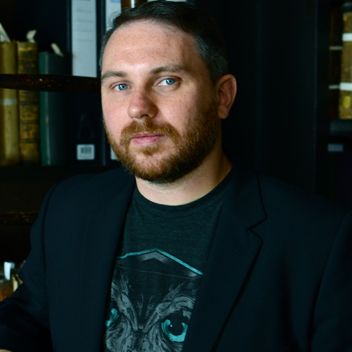 John Reppion was born in Liverpool, England in 1978. His writing career began in 2003 when he collaborated with his wife Leah Moore on a proposal for a six issue mini series entitled Wild Girl. The proposal was accepted and the series was published by Wildstorm in 2004/05.

Since then the duo have worked together on series such as ALBION (with Alan Moore & Shane Oakley) and RAISE THE DEAD (with Hugo Petrus). In 2011 Moore & Reppion created and wrote THE THRILL ELECTRIC (with Windflower Studio) – a ten part online motion comic set in Victorian Manchester.

John’s interests in fortean phenomena, esoterica, folklore, philosophy, theology and horror have led to his writing articles and reviews for numerous magazines and periodicals including Fortean Times, Strange Attractor, The End Is Nigh, Revenant Magazine and SteamPunk Magazine. 2008 saw the release of his first full length book 800 YEARS OF HAUNTED LIVERPOOL, published by The History Press.