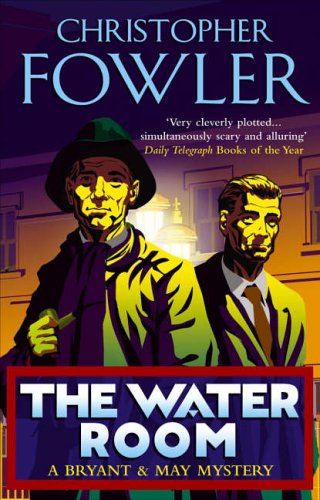 Bryant & May – The Water Room

Originally built to house the workers of Victorian London, Balaklava Street is now an oasis in the heart of Kentish Town and ripe for gentrification. But then the body of an elderly woman is found at Number 5. Her death would appear to have been peaceful but for the fact that her throat is full of river water. It falls to the Met’s Peculiar Crimes Unit, led by London’s longest-serving detectives, Arthur Bryant and John May, to search for something resembling a logical solution.

Their initial investigations draw a blank and Bryant’s attention is diverted into strange and arcane new territory, while May finds himself in hot water when he attempts to save the reputation of an academic whose knowledge of the city’s forgotten underground rivers looks set to ruin his career. In the meantime, the new owner of Number 5 is increasingly unsettled by the damp in the basement of her home, the particularly resilient spiders and the ghostly sound of rushing water . . .

Pooling their information to investigate hitherto undiscovered secrets of the city, Bryant and May make some sinister connections and realize that, in a London filled with the rich, the poor and the dispossessed, there’s still something a desperate individual is willing to kill for – and kill again to protect. With the PCU facing an uncertain future, the death toll mounts and two of British fiction’s most enigmatic detectives must face madness, greed and revenge, armed only with their wits, their own idiosyncratic practices and a plentiful supply of boiled sweets, in a wickedly sinuous mystery that goes to the heart of every London home.