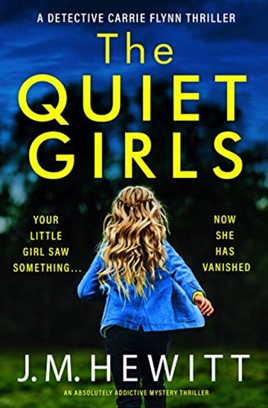 ‘Hattie!’ Carrie called, an edge to her voice. ‘Hattie, this isn’t funny, come out now.’ Carrie tried calling, shouting, screaming, but everything in the dark woods was quiet. Her little sister was gone.

Detective Carrie Flynn’s sister Hattie was kidnapped when they were both little girls. After the police failed to find the culprit, Carrie swore she would become a detective and solve the case herself. But the face of the man who snatched Hattie is a blank in her memory…

Twenty years later, eleven-year-old Melanie Wilson is reported missing. Carrie fights off memories of her lost sister to concentrate on the case, but she soon finds footage of Melanie boarding a boat and vanishing. Who took little Melanie, and why?

Then the police receive a desperate cry for help from another young girl: I gave you his name, but you did nothing. My blood is on your hands. Carrie traces the call to the same docks where Melanie was last seen.

Carrie is sure the lost girls are in terrible danger – and that there’s a link between her sister’s disappearance and this case. To find Melanie, Carrie must unleash the memories she’s buried for years. And if she uses her own demons to bring Melanie home, can she finally find out what happened to her sister?