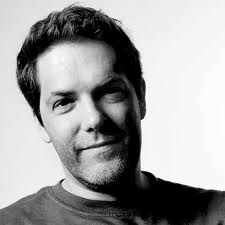 Rian Hughes is a British graphic designer, illustrator and comics artist, noted for his work on 2000AD, where he illustrated ROBO-HUNTER, TALES FROM BEYOND SCIENE, REALLY AND TRULY and DAN DARE, among others. His work is highly distinctive, wearing its design influences on its sleeve, daring to be two-dimensional and bold in its use of large expanses of flat, bold colours. This stood out particularly during the early 1990s, when British comics were leaning ever more towards fully painted art. Unusually, Hughes preferred to be his ownletterer, and designed several unusual fonts for this purpose.

Since leaving comics illustration, Hughes has become a successful advertising artist, graphic designer and font designer. He runs his own company, Device, with clients including Virgin Airways, Penguin Books, DC Comics, Eurostar the BBC and a range of magazines and newspapers. Hughes prefers to design his own fonts for new projects usually giving them humorous and occasionally rude names. The font Knobcheese was marketed as “A typeface in the Swiss (cheese) tradition. With knobs on.”