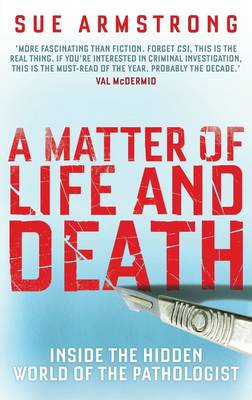 A Matter of Life and Death

‘Forget CSI, this is the real thing…The must-read of the year. Probably the decade.’ – Val McDermid

Too often caricatured by the media as ‘doctors of death’, pathologists are medicine’s key diagnosticians, on whom life itself often depends.

Post mortems are in fact a very small element of what pathologists do. Primarily their job is to identify from specimens sent to the lab from clinics and operating theatres exactly what a patient is suffering from and what treatment he or she is likely to respond to. Pathologists are disease specialists – some are experts in diseases of the tissues, the brain or blood, others in diseases caused by bacteria and viruses; only a small proportion are experts in forensic science.

In A MATTER OF LIFE AND DEATH Sue Armstrong encounters fourteen of the most eminent pathologists in the world, who work in fields as diverse as cancer research, the identification of bones in mass graves, and brain damage in deliberately shaken babies. The resulting book offers a fascinating snapshot of the practical, ethical and philosophical challenges facing contemporary medicine and powerfully conveys the excitement and drama of working at the interface of research science and practical medicine.

A MATTER OF LIFE AND DEATH was originally published by Dundee University Press in 2008 and was reissued with new material by Canongate in 2010.