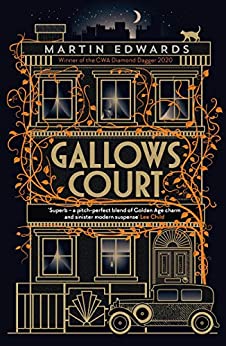 LONDON, 1930.
Sooty, sulphurous, and malign: no woman should be out on a night like this. A spate of violent deaths – the details too foul to print – has horrified the capital and the smog-bound streets are deserted. But Rachel Savernake – the enigmatic daughter of a notorious hanging judge – is no ordinary woman. To Scotland Yard’s embarrassment, she solved the Chorus Girl Murder, and now she’s on the trail of another killer.

Jacob Flint, a young newspaperman temporarily manning The Clarion‘s crime desk, is looking for the scoop that will make his name. He’s certain there is more to the Miss Savernake’s amateur sleuthing than meets the eye. He’s not the only one. His predecessor on the crime desk was of a similar mind – not that Mr Betts is ever expected to regain consciousness after that unfortunate accident…

Flint’s pursuit of Rachel Savernake will draw him ever-deeper into a labyrinth of deception and corruption. Murder-by-murder, he’ll be swept ever-closer to its dark heart – to that ancient place of execution, where it all began and where it will finally end: Gallows Court.

“Superb – a pitch-perfect blend of Golden Age charm and sinister modern suspense, with a main character to die for. This is the book Edwards was born to write”
Lee Child
“Dark, yet dazzling”
Peter Lovesey
“Satisfyingly twisty”
Simon Brett
“Gripping”
Peter Robinson