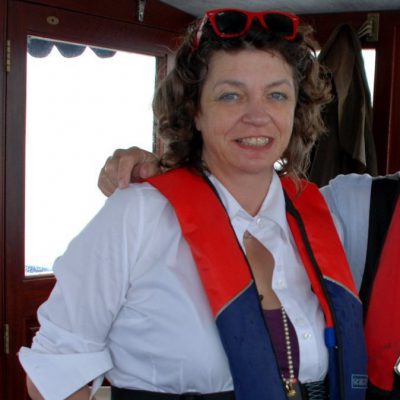 Shane Spall is the author of 2 memoirs charting her journey around Britain on a barge with her husband Timothy Spall, and his recovery from life-threatening leukaemia, both published by Ebury.

Shane is from a large Midlands family. Her mother called her Number Five and her father after a character in a Western, played by Alan Ladd. As a teenager in the 70s she worked in a Quaker hotel in Birmingham and on her day off would sit in New Street station and wonder where everyone was going. She now knows they were mostly going to work or coming home. The day that the young actor Timothy Spall arrived at New Street in 1981 she was in a council flat a few miles away. They could have been ships that had passed in the night but he sought her out because he had fallen passionately in love with her when he had accidentally touched her arm one night. The young actor now gets to play parts called ‘old man’ but is considered to be a ‘national treasure’. He’s a bit of a show off, but his wife doesn’t mind, she keeps his feet on the ground. They have three children and used to have a bulldog that couldn’t swim and a goldfish but they fostered it out as it got lonely staying home on its own.