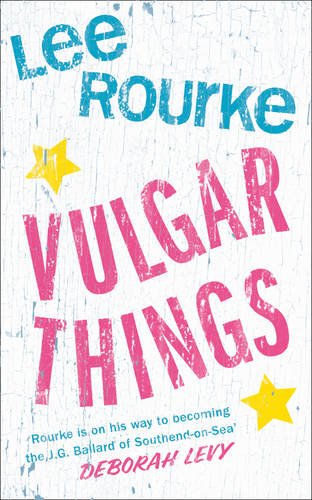 Jon Michaels – a divorced, disinterested and fatigued editor living a nondescript life in North London – receives a sudden phone call from his brother, informing him that their estranged uncle Rey has been found dead in his caravan on Canvey Island. Recently sacked from his job, carrying a hangover from hell and craving some sort of escape, Jon reluctantly agrees to spend the week on the island to sort through his uncle’s belongings.

Haunting, modern and utterly compelling, VULGAR THINGS follows Jon as he unearths a disturbing family secret while losing himself in the strangely alluring landscape. Vulgar Things is a novel about love, longing and being lost. It’s about desire, the sea, big skies and nothingness. It’s about money and how much we’ll dirty our hands to get it. But, above all, it’s about how a chance meeting with a mysterious person can change your life forever.

“As poignant and unsettling as a beam of light hitting the night sky from across the far-off wastes.”
Eimear McBride, Bailey’s Prize winning author of A GIRL IS A HALF-FORMED THING
“Sad, lost men looking for maps in the starry Essex sky, small-town strippers, absent mothers, angry brothers, planets photographed on smart phones, cider and a lot of rare steak – Rourke is on his way to becoming the J.G. Ballard of Southend-on-Sea.”
Deborah Levy, Booker-shortlisted author of SWIMMING HOME
“The poetry of estuary landscapes – muddy creeks, silhouettes of refineries, the slow passage of giant container ships, the flat horizon – shines through Lee Rourke’s prose with a black luminescence.”
Tom McCarthy, Booker-shortlisted author of THE REMAINDER and C
“A consistently disturbing yet compelling vision of loss, violence and identity, VULGAR THINGS stalks the reader’s memory long after the last page. A novel of innovation and resonance, it is as bleak and as beautiful as a deserted coastline.”
Stuart Evers

Other books by Lee Rourke