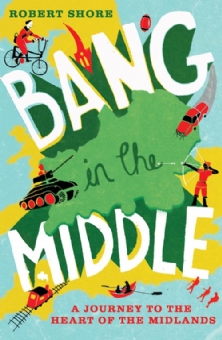 Bang In The Middle

A book to put the Midlands back on the map.

Everyone knows what they think of the North and South of England – the clichés abound. But what about that big, anonymous stretch of land in between: the Midlands? Despite being home to around a third of the English population, it’s a region that seems to have neither purpose nor identity. In this humorous exploration, the author – a Midlander exiled in London – sets off on a tour of the country’s belly in order to piece together his Midland heritage. What he discovers is nothing short of revelatory: quietly, without fanfare, the Midlands have powered most of English – and not just a little of world – history.

The Industrial Revolution was forged there, as were the ideals of the Land of the Free and the theory of evolution. Shakespeare, world literature’s greatest genius, was born in the Midlands, as were Margaret Thatcher, Dr Johnson and Robbie Williams. It is the home of Robin Hood, Walker’s crisps, Marmite, Raleigh bikes and the balti. And that’s not all: music, fashion, sport – almost every domain of contemporary life has been reinvented and remoulded in the stoically self-effacing lands squeezed between the self-mythologising South and the narcissistic North. Why, we even have the Midlands to thank for the modern idea of sex. Join Robert Shore on a fascinating, and very funny, journey to the heart of our great nation.

Other books by Robert Shore