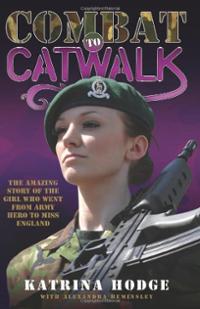 Katrina Hodge is a tomboy. Katrina Hodge is a soldier. Katrina Hodge is a beauty queen. Katrina Hodge is a role model. Most importantly, she has proved that these things need not be exclusive. She has done this with a combination of hard work and charm, and a total convicition that you can achieve anything you set your heart on. Lance Corporal Katrina Hodge joined the Adjutants’ General Corps of the British Army at 18. She was posted to Iraq, and awarded a bravery commendation on her return. Then persuaded by a friend to enter a local competition, she won the Tunbridge Wells beauty contest. Qualified to enter the ultimate pageant in Miss England, and egged on by the same friend, she decided to go for it. And she won. So began a whirlwind adventure in which she gained the Miss England crown, all the time using her combat skills to wow the judges in the talent rounds.

Kat is dedicated to using the national media platform she has gained in order to promote Army causes, encouraging young women to consider an Army carer and supporting charities like Help For Heroes. She has had a major impact on Miss England in banning the famous swimwear round in favour of a sports round. Kat is breaking the stereotypes surrounding life as a soldier, and redefining what beauty means for young women today. Find out what it’s like to enter the Army, to be on desert patrol and to be a girl alongside the lads in a male-dominated world. And discover the heat of the competition in national and international beauty pageants, what it’s like to be tracked down by the press, and how it feels to be made up and photographed as part of major modelling campaigns.

This is a book about achieving your dreams. It’s the story of an ordinary Home Counties girl who set her heart on proving she could do it.