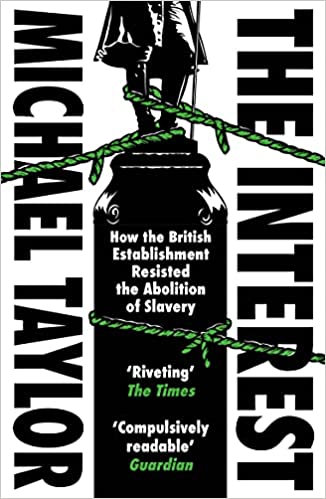 The Interest: How the British Establishment Resisted the Abolition of Slavery

Shortlisted for the Orwell Prize for Political Writing 2021

Daily Telegraph Book of the Year 2020

For two hundred years, the abolition of slavery in Britain has been a cause for self-congratulation – but no longer.

In 1807, Parliament outlawed the slave trade in the British Empire, but for the next quarter of a century, despite heroic and bloody rebellions, more than 700,000 people in the British colonies remained in slavery. And when a renewed abolitionist campaign was mounted, making slave ownership the defining political and moral issue of the day, emancipation was fiercely resisted by the powerful ‘West India Interest’. Supported by nearly every leading figure of the British establishment – including Canning, Peel and Gladstone, The Times and Spectator – the Interest ensured that slavery survived until 1833 and that when abolition came at last, compensation was given not to the enslaved but to the slaveholders. Worth £340 billion in today’s money, this was the largest pay-out in British history before the banking rescue package of 2008, incurring a national debt that was only repaid in 2017 and entrenching the power of slaveholders and their families to shape modern Britain.

Drawing on major new research, this long-overdue and ground-breaking history shows that the triumph of abolition was also one of the darkest episodes in British history, revealing the lengths to which British leaders went to defend the indefensible in the name of profit.

“The Interest by Michael Taylor is an outstanding and gripping revelation about the power of the Slave-Owners lobby – including all the pillars of 19th century British politics – to control state policy and resist the abolition of slavery – it’s essential reading.”
Simon Sebag Montefiore
“In The Interest, Michael Taylor presents a fascinating history of Britain’s approach to slavery. In doing so, he makes short work of the argument, long cherished by apologists for empire, that Britain’s main role in the atrocities of the slave trade was to abolish it. In debunking this argument, Taylor writes with vivid clarity about one of history’s greatest crimes, introducing us to people and places that have long since been consigned to the past and yet loom over the present - colonisers and the colonised, slave-trading tycoons and abolitionists, politicians and press. Meticulously researched and timely, The Interest is a critical piece of history and a devastating exposé of a misleading colonial narrative.”
Shashi Tharoor, author of INGLORIOUS EMPIRE and M.P. Member of Parliament for Thiruvananthapuram Lok Sabha
“Skillfully written with a powerful and passionate narrative this book helps us to fully understand how investors, owners, managers, and ideologues of the black chattel slavery enterprise succeeded in deflecting and dismissing public criticism and to win the debate that global black enslavement was in the national interest of Great Britain. It explains how a network of highly organized whites men in commerce, finance, politics and civil society, enticed into addicted, broad sections of society into pegging their existential being to the crime against humanity that slavery represented. The author shows how the enslavers’ battle to protect their trophy became the most dramatic public affair in early 19th century Britain. For decades they used the power of the state to defend to the bitter end the dying economic system. In defeat they never gave up and extracted as settlement the massive price of 20 million pounds in compensatory cash from the supportive government. This is a seminal work that carries the burden of phenomenal relevance.”
Hilary Beckles, historian and vice-chancellor of the University of West Indies
“The abolition of slavery in British territories in 1834 has often been seen as a logical extension of the abolition of the slave trade a quarter-century earlier. It might have taken much too long, but it flowed directly from that earlier triumph. So goes the story. However, as Michael Taylor demonstrates in this highly original, passionate, deeply researched, and beautifully written book, nothing could be further from the truth. Opposition to slave trade abolition had been a case of protecting specific economic interests, whereas opposition to slavery abolition was rooted deeply in British culture and in biblical theology. It was a frame of mind that expressed the values of a landed, authoritarian, and imperial state, values which permeated the thinking of many contemporary radicals as well as conservatives. Again, slave trade abolition had been fuelled at least in in part by moral, religious, and humanitarian convictions, but abolition of slavery itself can only be explained by powerful shifts in the politics of the country, in particular by the accession to power of a Whig-Liberal Government and the mobilisation of commercial and business support in key urban constituencies. Taylor's is a disturbing story but a very important one.”
Boyd Hilton, author of A Mad, Bad, and Dangerous People?: England 1783-1846 (New Oxford History of England); professor at Trinity College, Cambridge
“Michael Taylor's THE INTEREST is an absorbing and unsparing account of a wilfully distorted episode in British history and a vital antidote to the Rees-Moggification of the national past. As readable as it is timely, the book will appeal to the academic and the lay reader alike in contributing significantly to current reappraisals of Britain's relationship with its colonial past.”
Simon Skinner, Balliol College Oxford
“One achievement of Taylor’s fascinating book is that, for the first time in a book about abolition, it gives equal weight to the force of pro-slavery … Taylor intends The Interest to be a corrective to British self-congratulation about slavery. He argues that emancipation was neither inevitable nor altruistic; party politics in Westminster and rebellion from the West Indies played as much a role as moral outrage. Taylor’s political analysis is first-rate and riveting … Taylor’s achievement [is to] show that, thanks to the power of the Interest, being pro-slavery was seen as a respectable, even popular, position in British politics until the day of its demise. Above all, he reminds us of the role of those who have been unsung in this story — of Mary Prince, Samuel Sharpe and Quamina.”
Ben Wilson, The Times
“Taylor exposes the truth behind the longstanding narrative of Britain as a leading abolitionist force. In revealing how the British establishment resisted the emancipation of slaves, Taylor courageously confronts harmful historical revisionism in search of answers. Building on a thoroughly researched and potent historical account, The Interest makes a powerful case for reparations: once we reckon with the truth, we must finally atone for it.”
David Lammy, author of TRIBES and MP, Shadow Secretary of State for Justice and author of TRIBES: HOW OUR NEED TO BELONG CAN MAKE OR BREAK SOCIETY