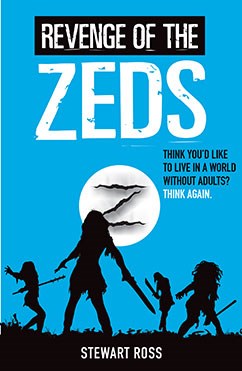 Revenge of the Zeds

Think you would like to live in a world without adults- think again! The sequel to the bestselling ‘Soterion Mission’. The Soterion has been opened, but does it mean salvation or devastation? A horrific mutation in human DNA has resulted in a world where no one lives beyond nineteen. Cyrus and the noble Constants have opened the Soterion vault containing the Long Dead’s secrets of science, art and possibly even the cure to the mutation. First, Cyrus must teach the Constants to read. But those he calls friends are falling prey to the greed and power knowledge can bring. Meanwhile, the barbaric Zeds are massing against them, determined to take the Soterion for themselves and destroy everything the Constants have built.

Other books by Stewart Ross