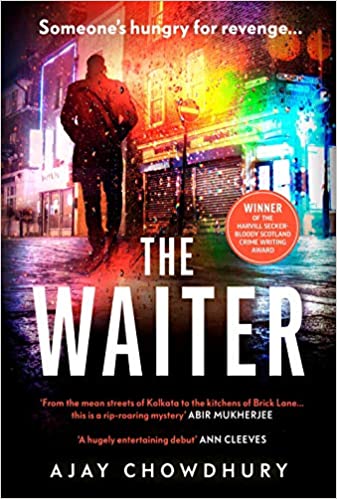 Kamil Rahman, disgraced detective, turned waiter, is about to find himself embroiled in a case that might just change his life…for better or for worse.

Ex-detective Kamil Rahman moves from Kolkata to London to start afresh as a waiter in an Indian restaurant. But the day he caters an extravagant party for his boss’s rich and powerful friend, the peace of his simple new life is shattered. The event is a success, the food is delicious, but later that evening the host, Rakesh, is found dead in his swimming pool.

Suspicion falls on Rakesh’s young and glamorous new wife, Neha, and Kamil is called to investigate for the family, with the help of his boss’s daughter Anjoli. Kamil and Anjoli prove a winning team – but as the investigation progresses, and their relationship grows, Kamil struggles to keep memories of the case that destroyed his career in Kolkata at bay. Little does he know that his past will soon catch up with him in some very unexpected ways.

“A hugely entertaining first novel, taking us from Kolkata to Brick Lane.”
Ann Cleeves
“A rip-roaring mystery that's engrossing from start to finish... a refreshing and welcome addition to the world of detective fiction. One of my favourite reads of the year. ”
Abir Mukherjee

Other books by Ajay Chowdhury