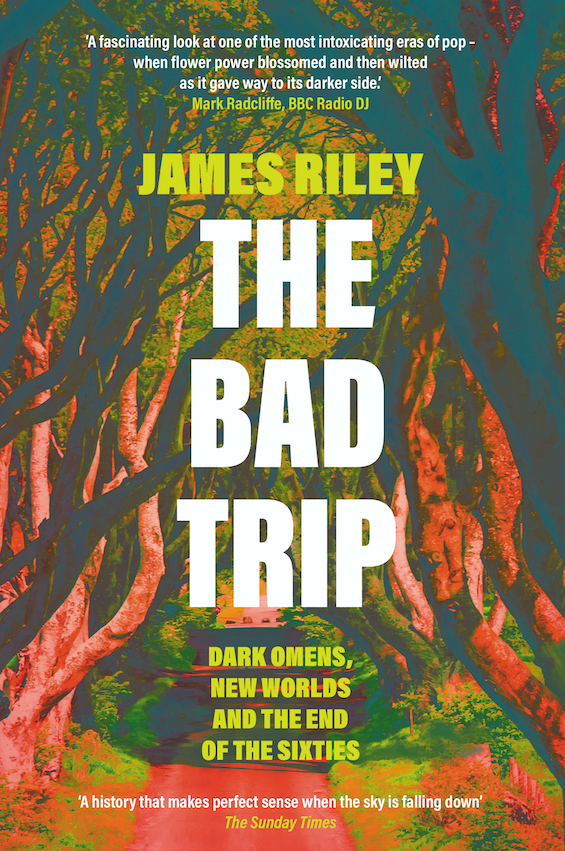 The Bad Trip: Dark Omens, New Worlds and the End of the Sixties

The Sixties, for many, was a time of new ideas, freedom, and renewed hope – from the civil rights movement to Woodstock. But towards the end of 1969 and the start of the 1970s, everything seemed to implode. The Manson murders, the tragic events of the Rolling Stones concert at Altamont and the appearance of the Zodiac Killer all called a halt to the progress of a glorious decade. At the end of the Sixties, the hippie dream died – or so the story goes.
In The Bad Trip, James Riley descends into the underworld of the Sixties to reveal the dark side of the counterculture. He explores the seam of apocalyptic thinking that had lain hidden beneath the decade’s psychedelic utopianism all along. Moving between Britain and America, this is a magical mystery tour that shows just how different our concept of ‘the Sixties’ is from the reality of the period.
A brilliant and trenchant cultural history published 50 years after the action – drawing on interviews with key figures from the music, art, and film scenes of the late 1960s and early 1970s in the US and UK.

“Dense with conspiracies, chaos and apocalyptic death drives, The Bad Trip is a history that makes perfect sense when the sky is falling down”
The Sunday Times
“A fascinating look at one of the most intoxicating eras of pop - when flower power blossomed and then wilted as it gave way to its darker side.”
Mark Radcliffe
“Essential reading for enthusiasts of 1960s transatlantic counter-culture, written with verve and brio. Riley is an expert tour guide”
Douglas Field, senior lecturer in literature, University of Manchester
“A dazzling account of the decline and fall of the 60s dream, forging links between US and UK countercultural practices”
Mark Goodall, author & senior lecturer in film, University of Bradford
“It's a meticulously researched look at how the hippies' rejection of rules opened the doors to drug abuse, occultism and some very dark deeds.”
Nick Duerden, the I
“A panoramic overview of the violent wind-scattered culture of the 1960s, where the worlds of politics, cinema, art and performance shoved each other closer and closer to the edge of madness.”
Ken Hollings, author of Welcome to Mars, The Space Oracle and Inferno
“The Bad Trip is a good trip: an essay on the power of art in dark times. In our own dark times, half a century later, that’s something worth reading.”
The Business Post
“Suffice to say this is one timely and captivating tome … Impressively in-depth, wide-reaching and thought-provoking. *****”
Shindig