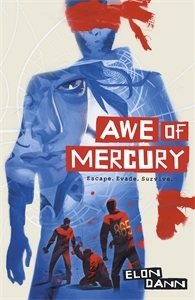 Mo is a penitent on the Death Spiral, a subterranean, circular death row. Each day, he gets closer to cell 1, where he will be executed. Trapped with the snivelling Nonstop, with only word games to pass the hours, Mo has given up. Until the memory of Harete stirs something, and he plans his most desperate escape attempt yet with a toothpick, the juice of the stomach-destroying chilli and a bucket of urine. Far above the Spiral, the Fartherland, his home, has disintegrated with appalling civil war. Mo knows this was triggered by the Moth’s liberation, and that he is to blame for the carnage and chaos. Mo vows revenge, but each escape is a step into an even more horrific reality than before. Unflinchingly told and truly unputdownable, AWE OF MERCURY is the stunning conclusion to CLOCKWISE TO TITAN.

Other books by Elon Dann