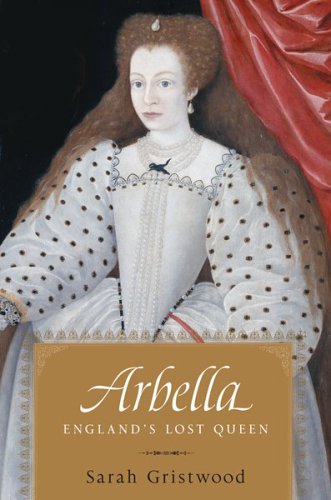 ‘It is Arbella they would proclaim Queen if her mistress should happen to die’ Sir William Stanley, 1592

Niece to Mary, Queen of Scots, granddaughter to the great Tudor dynast Bess of Hardwick, Lady Arbella Stuart was brought up in the belief that she would inherit Elizabeth I’s throne. Her very conception was dramatic: the result of an unsanctioned alliance that brought down the wrath of the authorities.

Raised in restricted isolation at Hardwick, in the care – the ‘custody’ – of the forceful Bess, Arbella was twenty-seven before, in 1603, she made her own flamboyant bid for liberty. She may also have been making a bid for the throne. If so, she failed. But the accession of her cousin James thrust her into the colourful world of his court, and briefly gave her the independence she craved at the heart of Jacobean society.

Then, aged thirty-five, Arbella risked everything to make her own forbidden marriage. An escape in disguise, a wild flight abroad and capture at sea led, in the end, to an agonizing death in the Tower in 1615. Along with the rumours about her sanity, her story influenced even Webster’s The Duchess of Malfi. Yet perhaps nothing in her tale is as striking as the degree to which a woman so widely discussed in her own day has been written out of history. Nothing as remarkable as the almost modern freedom with which, in a series of extraordinary letters, Arbella Stuart revealed her own passionate and curiously accessible personality.

Drawing on a wide variety of contemporary sources, Sarah Gristwood has painted a powerful and vivid portrait of a woman forced to carve a precarious path through the turbulent years when the Tudor gave way to the Stuart dynasty. But more remarkable still, the turmoils of Arbella’s life never prevented her from claiming the right to love freely, to speak her wrongs loudly – and to control her own destiny.

“Sarah Gristwood succeeds triumphantly not only in bringing alive the dead politics of the Jacobean court, but also in making vivid bricks with very little straw. This is an enthralling account of an extraordinary life”
Spectator
“Carrying her learning lightly, Sarah Gristwood presents a powerful story of the dynastic insecurity of the Tudors and Stuarts . . . The book evocatively describes the court and aristocratic worlds in which the dynastic pageants were played, and draws vivid portraits of the leading players and plotters”
Sunday Times