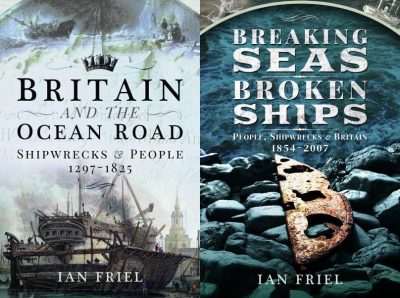 BRITAIN AND THE OCEAN ROAD and BREAKING SEAS, BROKEN SHIPS by Dr Ian Friel were both shortlisted for the 2021 Mountbatten Award for Best Book. See full shortlist here.

The shortlist for the 26th annual Maritime Media Awards was announced online 28 October. Over 100 nominations were received this year for the four main awards celebrating those in the media who raise awareness and focus on the issues across all sectors of the maritime industries.

Richard Clayton, Chairman of the Awards Committee, said: “The Maritime Foundation has a simple aim to promote awareness of the UK’s dependence on the sea and seafarers, and tonight’s virtual Maritime Media Awards will shine a spotlight on those individuals and organisations who show excellence, accuracy and ambition in maritime journalism, literature, filmmaking and digital innovation.”