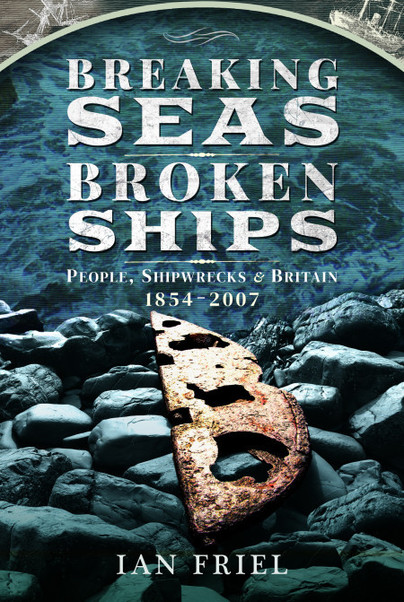 Ian Friel expertly navigates the history of Britain and the sea from the Middle Ages to modern times. With Breaking Seas, Broken Ships, we follow the story of Britain’s maritime history through some of it’s most dramatic shipwrecks. From the country’s imperial zenith to the very different world of the early twenty-first century we encounter an extraordinary range of people, ships and events, including…

– the crew and passengers of a state-of-the-art Victorian steamship who vanished in the Atlantic;

– the sailors of a doomed collier brig in the dying days of sail – and the wives and children they left behind;

– a lowly ex-naval stoker who went into showbiz with his version of a disaster caused by an admiral;

– the courage and compassion shown by British sailors who escaped their dive-bombed ships;

– the people who confronted the ‘black tide’ left by the oil tanker Torrey Canyon;

– how the container ship has helped to make a new world for us all – for better or worse.

With people at the heart of every chapter, it explores major environmental themes alongside the traditional concerns of maritime history, such as trade, social issues and naval warfare. Their experiences tell us the story of Britain’s maritime past, one that is remarkable, moving and at times horrifying. Based on brand new scholarship, it is perfect for history enthusiasts, professional historians and archaeologists alike.