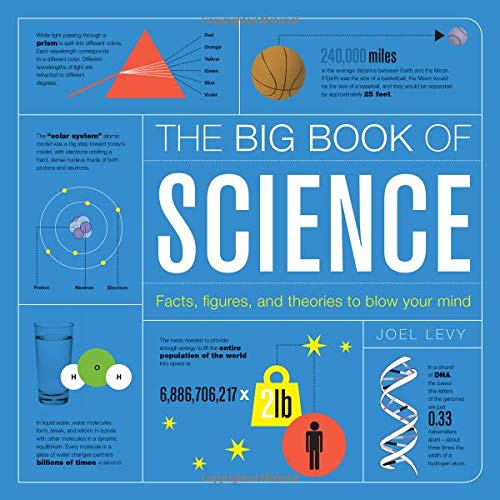 The Big Book of Science

The Big Book of Science uses analogies to demonstrate 100 basic scientific truths and principles in new and exciting ways, describing the unbelievably massive, the inconceivably tiny and the unfathomably complex in everyday terms. Readers will be drawn to the book by its combination of intuitive reasoning and a highly visual presentation style. It’s bursting with facts, figures, diagrams, charts, and illustrations. Each page helps readers understand fundamental scientific principles and theories by using analogies that describe abstract ideas using everyday objects.

Each analogy is explained in direct terms and clearly illustrated. A range of facts and figures — presented in uniquely accessible “infographics” — complements the analogies. The book covers a wide array of scientific topics: physics, chemistry, astronomy, biology, earth sciences, anatomy and technology. The analogies include:

Informative and engaging, The Big Book of Science gives readers a deeper appreciation of the forces and facts that govern the universe and everything in it.

Other books by Joel Levy