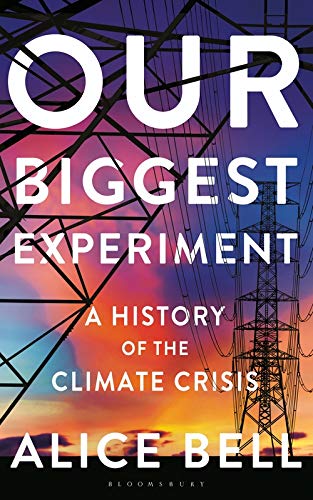 Our Biggest Experiment: A History of the Climate Crisis

Maybe it’s the weirdness of the weather. Maybe it’s another way to pour scorn on politicians. Maybe the steady stream of headlines about fires, floods and droughts is finally starting to get to us. Whatever it is, for more and more of us, climate change is shifting from a shadowy fear in the backs of our minds to something we feel we need to get a handle on.

Climate change may be a horror story, but, as Our Biggest Experiment shows, the tale of how we discovered it isn’t. The discovery of climate change didn’t feature a ‘Eureka!’ moment – it was a slow and gradual realisation as each new generation pieced together a little more information.

Our exploration of the Earth’s fluctuating environment is an extraordinary story of human perception and scientific endeavour. It also began much earlier than we might think. This book takes us back to climate change science’s earliest steps in the 18th and 19th centuries, through the point when concern started to rise in the 1950s and right up to today, where the ‘debate’ is over and the world is finally starting to face up to the reality that things are going to get a lot hotter, a lot drier (in some places) and a lot wetter (in others), with catastrophic consequences for most of Earth’s biomes.

Our Biggest Experiment recounts how the world became addicted to fossil fuels, how we discovered that electricity could be a saviour, and how renewable energy is far from a 20th-century discovery. Alice Bell cuts through the jargon and jumble of numbers to show how we’re getting to grips with what is now the defining issue of our time. The message she relays is ultimately hopeful; harnessing the ingenuity and intelligence that has driven the history of climate change research can mean a more sustainable and bearable future for humanity.

“Enthralling, compelling, invigorating. OUR BIGGEST EXPERIMENT is the story of our ballooning, overwhelming consumption of fossil fuels – it’s about our blundering and dangerous experiment with planetary stability. It’s a story that demands to be told – the history of the crisis we’ve gotten ourselves into that is now threatening the Earth system itself.
It’s hard for humans to think and plan very far into the future, our minds just don’t work like that. Perhaps we’ll get better by understanding the past, and this vibrant and wonderfully detailed book does that brilliantly, by bringing to life the characters – and corporations – from the past whose names we all know, from Tesla and Watt to Esso and Shell. You might think it’s more important to focus on the future of our planet, but only by understanding our history can we start to shape what happens next. Read this and be energised – on a renewable source of power, of course – to save the world.”
Rowan Hooper, New Scientist
“The climate crisis is so overwhelming it can be easier not to engage with the problem. However, Alice had me every step of the way. She guides the reader on an international journey through time, focusing not on statistics but the complex human story and fascinating characters that have led us to where we are now.”
Maddie Moate
“The story of the climate crisis and the making of the modern world are intertwined, and in this meticulously researched and elegantly written book, Alice Bell is the perfect guide to unpicking how humanity came to face its most profound threat.”
Neil Denny, host of Little Atoms podcast
“OUR BIGGEST EXPERIMENT is a spectacular achievement - the definitive history of the most consequential issue of our time. Majestic in scope, it offers not one but two epic stories - how we changed the world, and how we came to realize what we've done - told through Alice Bell's charming, witty, and authoritative writing. ”
Ed Yong