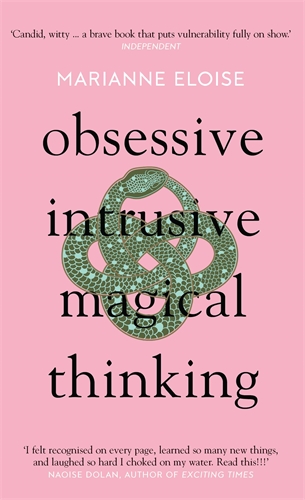 An exploration of the intersection of neurodivergence, obsession and disorder.

Obsessive was, still is, my natural state, and I never wondered why. I didn’t mind, didn’t know that other people could feel at peace. I always felt like a raw nerve, but then, I thought that everyone did.

Writer and journalist Marianne Eloise was born obsessive. What that means changes day to day, depending on what her brain latches on to: fixations with certain topics, intrusive violent thoughts, looping phrases. Some obsessions have lasted a lifetime, while others will be intense but only last a week or two.

OBSESSIVE, INTRUSIVE, MAGICAL THINKING is the culmination of a life spent obsessing, offering a glimpse into Marianne’s brain, but also an insight into the lives of others like her. From death to Medusa, to Disneyland to fire, to LA to her dog, the essays explore the intersection of neurodivergence, obsession and disorder, telling the story of one life underpinned and ultimately made whole by obsession.

“The mortifying ordeal of being known, minus the ordeal and sans mortification. I felt recognised on every page, learned so many new things, and laughed so hard I choked on my water. Read this!!!”
Naoise Dolan, author of EXCITING TIMES
“In her candid, witty memoir, Marianne Eloise offers a powerful account of what it is like to feel trapped by mental health problems and obsessions. A brave book that puts vulnerability fully on show. ”
The Independent
“There are several shrewd observations made within this lucid and level-headed memoir. Amongst them is the way the matrix of obsession, compulsion and intrusion represents an exaggeration of conventional anxieties.”
Arts Desk
“[Marianne Eloise] sets a precedent for representing neurodiversity in a whole new way. A refreshing memoir.”
The Debut Digest