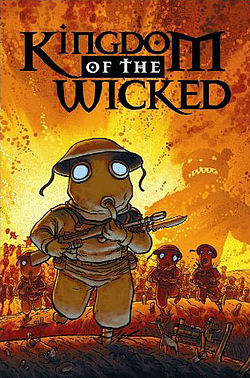 Kingdom of the Wicked

Christopher Grahame is the premier children’s author of the twenty-first century. From a handful of homespun tales told to his own children at bedtime, Chris Grahame is a publishing phenomenon. With his work translated into everything from Aborigine to Zulu, he is the cornerstone of a multi-million dollar, franchise spewing empire. Is it any surprise then that under all this pressure something has to give? Unfortunately, it’s Chris’s mind. Stricken by mysterious headaches and blackouts that plagued his childhood, Chris once again finds himself walking the avenues and boulevards of Castrovalva – the fantasy realm he dreamt up as a boy, to while away his recuperation. But like Chris, Castrovalva has also changed. Deluged in mud, blood, and barbed wire, war has come to wonderland. Chris tries to tell himself it’s all a bad dream. . .so why can’t he wake up?

Other books by Ian Edginton