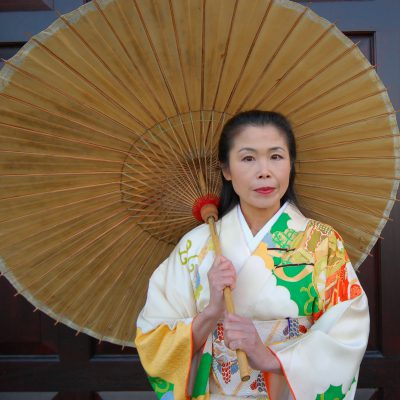 ‘In Japan, when you turn 60, you are reborn.’ So Akemi Tanaka told us in 2019, when she not only celebrated her 60th birthday, but also got married and published her book The Power of Chōwa: Finding Your Balance Using the Japanese Wisdom of Chōwa. With her sense of mischief and love of laughter, combined with the poise and radiance that gave no doubt this rested on centuries of Samurai wisdom, this was easy to believe. It was a terrible shock and sadness to learn earlier this year that she had cancer. Her decline was rapid, and she died on Monday 24 May 2021.

Akemi Tanaka came from a Japanese family of the Samurai tradition. She grew up learning the ancient arts and practices of her culture, from tea making to kimono. Her outlook was refined by concepts like Bushido and Chōwa, and seeing the world through the lens of wabi-sabi, an idea influenced by Zen Buddhism denoting beauty infused with the mystery and melancholy of its impermanence. While Akemi was educated to meticulous standards of Japanese etiquette, she was also highly independent and driven to seek ways to adapt these ideas to suit a modern woman like herself. Her first marriage, into Japanese high society, ended in divorce. Later, when she married an Englishman in Japan, officials initially refused them the ceremony, but they pushed it through by phoning the British Embassy.

Akemi came to England as a single mother with her daughter Rimika, and established herself as a lecturer on Japanese language and culture, a cultural commentator and consultant, performing tea ceremony and kimono demonstrations at a wide variety of events. In 2011, in the wake of tsunami, she set up the charity Aid for Japan to help care for orphans of the disaster. In the last years of her life, Akemi devoted her time also to campaigning on behalf of rape victims in Japan. She was deeply concerned about breaking the taboos around rape.

Akemi’s book was published by Headline Home in 2019 and by Harper Design US in 2020, and will be translated into 9 languages. That year she broke her arm and was unable to wrap her kimono or put her hair up. This gave me the lucky chance to travel with her to Spain on publicity tour. She delighted journalists – her anecdote about the demure Japanese lady who was not defenceless, with a blade sewn into her fan, a particular favourite.

Akemi’s legacy in parts rests in her beautiful, insightful book The Power of Chōwa. She is survived by her daughter Rimika and her husband Richard.