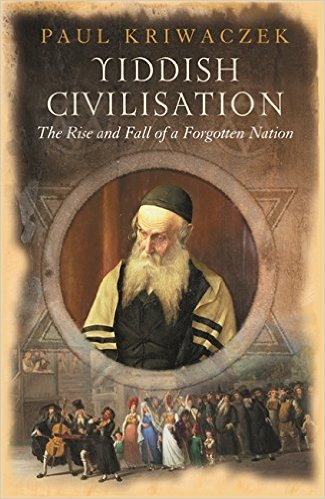 Yiddish Civilisation: The Rise and Fall of a Forgotten Nation

In the 13th century Yiddish language and culture began to spread from the Rhineland and Bavaria slowly east into Austria, Bohemia and Moravia, then to Poland and Lithuania and finally to western Russia and the Ukraine, becoming steadily less German and more Slav in the process. In its late-medieval heyday the culturally vibrant, economically successful, intellectually adventurous and largely self-ruling Yiddish society stretched from Riga on the Baltic down to Odessa on the Black Sea.

In the 1650s the Chmielnicki Massacres in the Ukraine by the Cossacks killed 100,000 Jews, forcing those that were left to spread out into the small towns (shtetls) and villages. The break-up of Poland-Lithuania – a safe haven for Jews in previous centuries – in the late 18th century further disrupted Yiddish society, as did the Russian anti-Jewish pogroms from the 1880s onwards, at the very time when Yiddish was producing a rich stream of plays, poems and novels.

Paul Kriwaczek describes the development, over the centuries, of Yiddish language, religion, occupations and social life, art, music and literature. The book ends by describing how the Yiddish way of life became one of the foundation stones of modern American, and therefore of world culture.