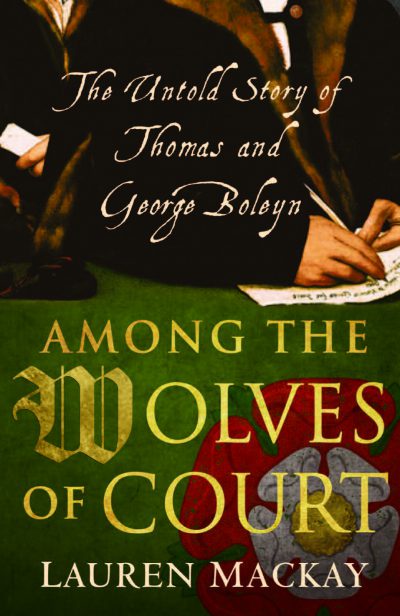 Among the Wolves of Court: The Untold Story of Thomas and George Boleyn

The tragic story of Anne Boleyn has been retold over the centuries, yet two key figures in Anne’s life–her father Thomas and brother George–are often relegated to the margins of Henry VIII’s turbulent reign.  Well before Anne’s coronation in 1533, Thomas was regarded as one of Henry’s most skilled and experienced ambassadors, and George was a talented young courtier on the rise. But Anne’s downfall was to have a devastating effect on her family – ultimately costing her and her brother their lives. A family whose success and prestige had been shaped over generations was destroyed in a violent and brutal episode as the king sought a new wife and a male heir. In this first biography devoted to the Boleyn men, Lauren Mackay takes us beyond the stereotypes of Thomas and George to present a story that has almost been lost to history. This book follows the Boleyn men as they negotiated their way through the ruthless game of politics among the wolves of the court, and establishes their place in Tudor history.

“Brilliantly researched, beautifully written and filled with wonderful detail, this is a superb biography - it will make you see the Boleyns in a completely different way. Lauren Mackay has gone deep into the documents and brought the Boleyns to vivid and important life. Essential reading.”
Kate Williams, author of Rival Queens

Other books by Lauren Mackay