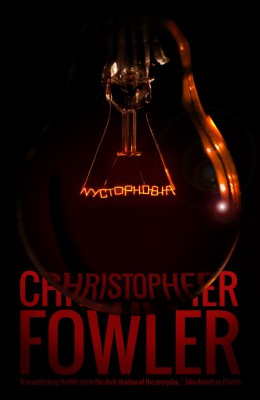 Happy Publication Day to the amazing Christopher Fowler – his latest horrifying thriller NYCTOPHOBIA was published today by Solaris both here in the UK and the US.

NYCTOPHOBIA tells the story of newly-married architect Callie and her wealthy husband who move to the grand old Hyperion House in southern Spain. Callie, determined to uncover the history of her new home, learns that sometimes the past is best left alone as she is drawn into darkness and delusion.

Born in London, Christopher Fowler has written for film, radio, television, graphic novels and for newspapers, including The London Times, for more than thirty years. He is a regular columnist for The Independent on Sunday. Fowler is the multi-award winning author of more than thirty novels, including the lauded Bryant & May mysteries. In the past year he has been nominated for eight national book awards and his latest thriller is sure to not disappoint.