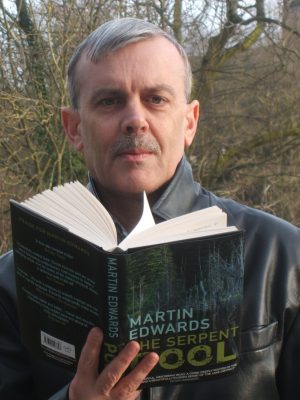 Edwards said: “The Diamond Dagger is special because it’s conferred by my fellow authors. I fell in love with crime fiction when as a young boy I first discovered Agatha Christie. From then on, my only ambition was to write a detective novel that people might enjoy reading. But I never imagined receiving an accolade like this.”

CWA chair Linda Stratmann said: “Martin Edwards has been honoured not only as an award-winning author and editor, but also as a tireless promoter of crime writing. He researches and preserves the history of the genre, and has introduced the modern reader to classics of the past that might otherwise have been forgotten.”

Edwards was a solicitor at Mace & Jones and is now a consultant for Weightmans LLP. Author of four editions of Equal Opportunities Handbook, he added: “The appeal of fiction is not so very different from the appeal of employment law. Both concern conflicts in human behaviour–and how best to resolve them.”

Following in the footsteps of Agatha Christie, Martin was elected President of the Detection Club in 2015, a social network of crime writers. The club will celebrate its 90th birthday this year by publishing Howdunit (HarperCollins) in June 2020, offering insights into crime fiction writing and edited by Martin.

He also consulted on the British Library’s bestselling Crime Classics series and wrote the companion volume, The Story of Classic Crime in 100 Books. He is the former CWA chair and editor of the CWA’s annual anthology. He has won the CWA Short Story Dagger, the H R F Keating award, the 2014 inaugural CWA Margery Allingham Prize and CWA Dagger in the Library, awarded by British librarians. His novels have been shortlisted for the Theakston’s Prize and the Lakeland Book Award, while in 2017 his non-fiction book The Golden Age of Murder was shortlisted for the CWA Gold Dagger.

In the US he has received the Mystery Writers of America Edgar Allan Poe award, an Agatha award, and two Macavity awards from Mystery Readers International. In 2017 he received the Poirot award for his outstanding contribution to the genre.