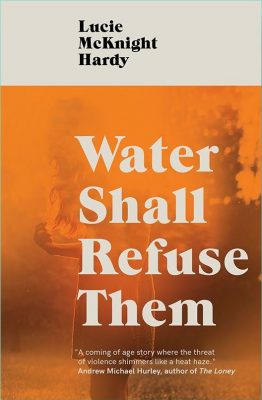 Dead Ink Books are pleased to announce that they have optioned the right to Lucie McKnight Hardy’s debut novel, WATER SHALL REFUSE THEM, to Lime Pictures for adaptation into a limited series for television.

McKnight Hardy’s novel is set during the summer heatwave of 1976 and follows troubled teenager Nif and her family as they relocate to a village on the Welsh borders to escape their grief after the accidental drowning of her sister. There, Nif begins to invent her own witchcraft rites in order to bring harmony to her life. Described as a coming-of-age folk horror and reminiscent of Shirley Jackson, WATER SHALL REFUSE THEM was first published by Dead Ink Books in July 2019 and immediately became one of their best-selling titles after it was featured as Book of the Month in Wales by Waterstones and Book of the Month in Blackwell’s Manchester.

Quotes:
Nathan Connolly, Director – Dead Ink Books:
“Lucie McKnight Hardy’s debut novel is a tightly wound demonstration of slow-burning turmoil and mounting, unstoppable horror. We’re incredibly excited for Lime Pictures to take this book on and bring it to the screen. Louise is the perfect champion for the work as we knew immediately upon meeting her that she saw right into the (dark) heart of the novel.”

Louise Sutton, Executive Producer – Lime Pictures
“When I read WATER SHALL REFUSE THEM I was enthralled by the story of Nif’s family coming to terms with tragedy in this strange, claustrophobic world. As the story unraveled I was totally gripped and could practically feel the heat of summer radiating from the book. It’s a perfect story to adapt for television, riven with tension and mystery and I am so pleased to be working on it with Lucie and Nathan from Dead Ink.”

Lucie McKnight Hardy, author – WATER SHALL REFUSE THEM
“When I was writing WATER SHALL REFUSE THEM, I would occasionally allow myself the daydream of one day seeing it on screen, as I am sure many writers do. This in itself influenced the writing and the result is a novel which is vivid and colourful. I’m delighted to be working with the team at Lime Pictures on the adaptation. This is an extremely exciting development.”