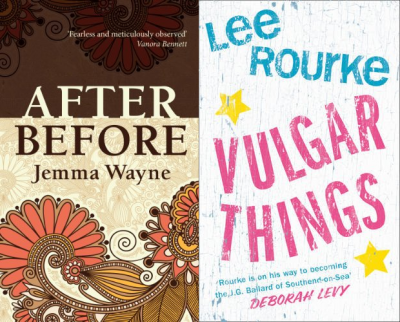 Jemma Wayne’s AFTER BEFORE (Legend Press) and Lee Rourke’s VULGAR THINGS (4th Estate) have been included in the longlist for the Guardian‘s Not the Booker Prize 2014. The Guardian runs the annual prize in parallel with the Man Booker Prize,  designed to be ‘a hunt by readers of the Guardian books blog to find the year’s best book, which may – or may not – tally with the assessment of the Man Booker prize judges’.

AFTER BEFORE has been described by Vanora Bennett as ‘a fearless and meticulously observed examination of pain transformed by the redeeming power of friendship’, while VULGAR THINGS has attracted praise from the likes of Eimear McBride, Tom McCarthy, Deborah Levy and Stuart Evers.

The shortlist will be decided by public vote, which ends at midnight on 3 August.

Lee won the prize in 2010 for his first novel THE CANAL.