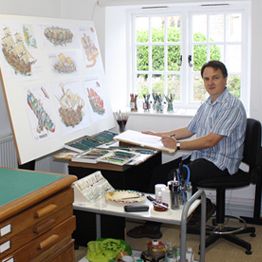 Stephen Biesty is a British illustrator. He was born in Coventry and grew up in Leicestershire. In 1979 he joined Loughborough College of Art and Design where he did an arts foundation course. In 1980 he moved to Brighton Polytechnic to gain a BA Hons in Graphic Design specialising in illustration, focusing on historical and architectural drawings. After graduating from Brighton with a first class degree, Biesty went on to gain an MA in Graphic Design at the City of Birmingham Polytechnic, working further in historical reconstruction.

Biesty is considered a master of cross section. Working with Richard Platt, who writes the text for the majority of his books (which have covered a wide range of informative cross sections aimed at adults and children, all published by Dorling Kindersley), Biesty has found great success. Most notably, his INCREDIBLE CROSS SECTIONS (1992) is an international bestseller with over one million copies in print worldwide. Other Biesty books written by Platt include MAN-OF-WAR (1993), CASTLE (1994), INCREDIBLE POP-UP CROSS-SECTIONS (1995), INCREDIBLE EXPLOSIONS (1996), INCREDIBLE EVERYTHING (1997), INCREDIBLE BODY (1998) and ABSOLUTELY BEST CROSS-SECTIONS BOOK EVER (1999). Since 1999 he has also illustrated the MILLENIUM DOME POP-UP BOOK (1999), GOLD: A TREASURE HUNT THROUGH TIME (Meredith Hooper) (2002), and ROME (Andrew Solway, Stephen Biesty) (2003). Biesty now lives in Somerset with his wife and son.