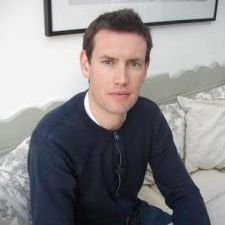 Robin Harvie is a writer and Non Fiction Publishing Director of Macmillan.

Robin ran his first marathon in 2000 after a bet. Since then he has run 15 more, without being able to get any around any faster than 3 hours 12 minutes. If he could not run any faster how much further than a marathon he could run, he wondered. So he decided to take on the Spartathlon, the toughest footrace on earth, which covers 152 miles, non-stop, from Athens to Sparta. In preparation he ran 6,000 miles in one year including taking on the Round Rotherham 50-mile ultra, the Sri Chinmoy Transcendental 100 kilometre ultra-Marathon, in which he came 4th, and the 72 mile Bob Graham Round in the Lake District before packing his bags for Athens in September last year.

35,000 people run the London Marathon every year. For some this is enough. For others the desire to test the limits of their capacity is overwhelming. WHY WE RUN is a journey of obsession, grief and growing into adulthood in the ultimate story of self-discovery.