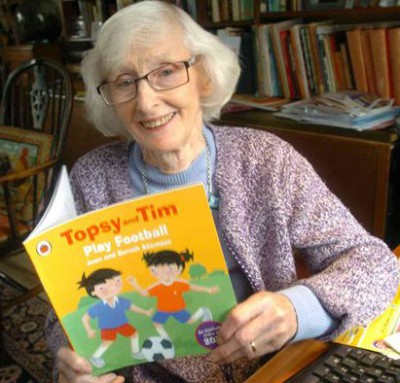 Jean and Gareth Adamson, creators of the famous TOPSY AND TIM series met whilst studying art and illustration at Goldsmiths College in the 1950s. Jean was born in Peckham on 29th February 1928. After attending grammar school until the age of 16, she graduated to Goldsmiths college to study illustration. Jean continued to teach illustration and design at Goldsmiths and also did work for a large animation company. Advertising campaigns she worked on included illustations for the Birds Custard and VAT 69 accounts.

Jean and Gareth met again in London and married in 1957. Having moved to Newcastle they decided to work together on children’s books and find an agent. “I would do the basic subject research and layout,” says Jean, “and I would sketch out the bare bones of the plot. Gareth would then take over and produce a beautifully crafted storyline. I would then do the illustrations. We made a very good team.” Publishers Blackie expressed interested in taking them on.

Blackie were delighted with the response to the first book, MONDAY and commissioned a full ‘days of the week’ series. The books were full colour all the way through and were sold in hardback. The series went from strength to strength and soon the publishers were requesting different types of books in varying formats. Topsy and Tim began to have more exciting adventures including sailing, riding and hill-walking – each activity and situation was carefully researched by Jean and Gareth. Activity and learning books were soon to follow.

During this busy time, Gareth and Jean had three children who enjoyed and influenced the series. When the family went to a safari park Jean would see how the children reacted to the animals and her observations would be mirrored in the book (for example when one of the tigers licked the window of the car, far from being afraid, the children were delighted, as shown in TOPSY AND TIM GO TO THE SAFARI PARK.

Over 130 Topsy and Tim titles have been published in many different formats. With sales of more than 21 million copies (over a million copies have been sold in the UK since 1998 alone) the series has never been out of print in one form or another.

Gareth died in 1982 but Jean continues to be involved in the Topsy and Tim publishing programme. Now a grandmother, she still sketches the rough concepts for a designer to illustrate up to artwork stage as well as having an input into the final designs – her work was recently recognised in the form of an MBE for services to children’s literature.

Books by Jean and Gareth Adamson