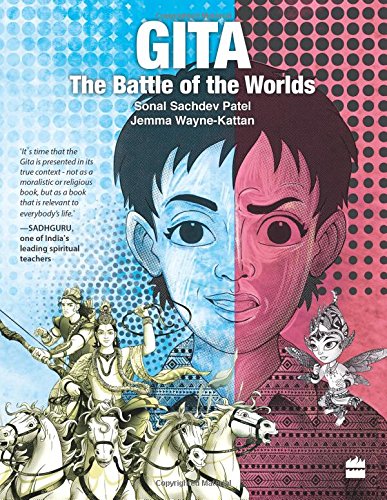 Gita: The Battle of the Worlds

When eleven-year-old Dev’s father dies, he can’t stop lashing out at those he loves. Until he meets Sanjay, a sprite-like being who claims there is a battle raging inside Dev’s own body. Sanjay embarks on a perilous journey beginning in the darkest realm at the bottom of Dev’s spine. As he searches for the noble warrier Prince Arjun, the only hope to defeat wicket Prince Ego, Sanjay encounters starving mobs, thieving gangs, water worlds and lands of fire, until at last he finds Arjun on the battlefield, ready to fight for Dev. This book takes the epic battle within the Gita and transports it inside the body of a young boy called Dev. A classic story of good overcoming evil, through Dev and Sanjay’s adventure, readers will be able to connect with some of the deeper concepts in the Gita.