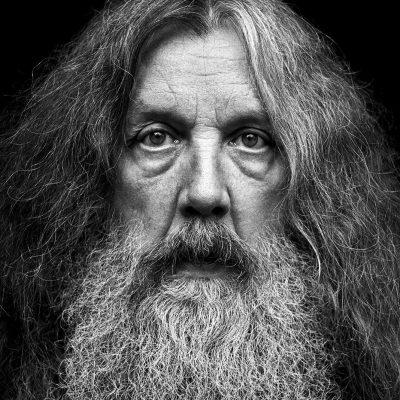 Illuminations is an astonishing, rich and broad collection of short stories, each featuring some kind of illumination or realisation. From ghosts and otherworldly creatures to the four horsemen of the apocalypse to the Boltzmann brains fashioning the universe at the big bang, Alan Moore’s Illuminations is a series of beguiling and elegantly crafted tales that reveal the full power of imagination and magic.

Long London will be a series about ‘a sometimes-accessible shadow city that is beyond time’. This is a hugely inventive, atmospheric, mythical world of murder, magic and madness. It is a quintet of novels that sweeps across the 20th century, starting in the shell-shocked and unravelled London of 1949, and following the populations of writers, criminals, artists, and magicians through that familiar city and a version of London just beyond our knowledge.  Long London starts with the hunt for a serial killer in post-war London but then the story opens up to reveal parallel worlds, crossing, myth, history, geography and art.

Paul Baggaley says: ‘In my role at Bloomsbury, I can only take on a few authors, but there couldn’t have been one that tempted me more than the idea of publishing a unique project from one of the most original and talented creative figures of the last 50 years. Alan Moore is simply a legend and it has been such a pleasure to listen to him talk about his ambitious Long London project as well as discovering the range of his shorter fiction. What a privilege it is to be given the chance to work with Alan; it’s certainly one which has set Bloomsbury alight.’

James Wills says: ‘These extraordinary stories blew my mind. I can think of no one better than Alan to write this truly astounding series, making, as he does, mundane things spectacular and fantastical things everyday.’

Alan Moore says: ‘At a moment in my career when I am bursting with fiction, bursting with prose, I couldn’t be happier with the new home that I’ve found at Bloomsbury: a near-legendary independent publisher with a spectacular list and a fierce commitment to expanding the empire of the word. I have a feeling this will be a very productive partnership.’